Here is the initial information on the shooting that occurred today in New Jersey. It appears to be the result of a family dispute by an estranged husband. 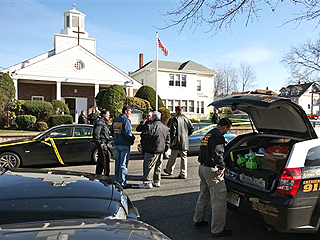 A shooting inside of a New Jersey church service Sunday morning left one woman dead and two others critically injured, MyFOXNY is reporting.

Congregants were attending the morning service when shots were reported at 11:40 a.m. According to the church’s Web site, service traditionally begins at 11:15 a.m.

Dennis John and Silvy Perincheril, both of Hawthorne, were reportedly injured in the shooting, according to NorthJersey.com. Perincheril — who was shot in the stomach— is the church’s choir director. James was Perincheril’s niece, visiting from California.

The shooting was believed to be a case of domestic violence, NorthJersey.com said. According to police, James had a restraining order against Pallipurath in New Jersey.

Officials from the Passaic County sheriff’s department and the prosecutor’s office responded to the scene, where more than 200 parishioners had been attending service, MyFOXNY reported.

According to NJ.com, St. Thomas Knanaya is a Syrian Orthodox Church. People at the scene said that the shooting took place during a prayer service for the dead.

A witness told NorthJersey.com that Pallipurath came into to the church saying, “I came to take my wife.”

Additional Information:
NorthJersey.com reports that Reshma James, 24, died after being shot in the head — allegedly by her estranged husband — at St. Thomas Syrian Orthodox Knanaya Church in Clifton. Police are looking for Joseph Palliturath.

The other two victims, Dennis John and Silvie Perincheril, both of Hawthorne, N.J., were in critical condition at St. Joseph’s Medical Center in Paterson.. Perincheril is the church’s Sunday school director.  James is Perinsheril’s niece, according to congregants.

Some 200 people reportedly were inside the Third Street church when the gunman opened fire before noon. Police said several 911 calls came from inside the church around 11:40 a.m.

Police kept the congregants inside the church until around 1:30 p.m. for questioning.

St. Thomas Knanaya is an Asian-Indian house of worship. Church members are mostly first-generation immigrants and their children from Kerala, India. The church’s Web site says the regular Sunday sermon begins at 11:15 a.m.
—
NorthJersey.com contributed to this report.