The unfortunate fact is the number of violent acts has increased significantly in this past year. I have logged eleven shooting incidents in 2008 verses four in 2007. The one encouragement is that the average loss of life was smaller in the 2008 incidents as there were the 10 people killed in both 2007 and 2008. The reduction seems to be due to the fact that church security or church members intervened in many of these incidents in 2008 where in the past, the shooter continued until they decided to commit suicide or to leave the area.
The following graph displays the amount of incidents since 1988 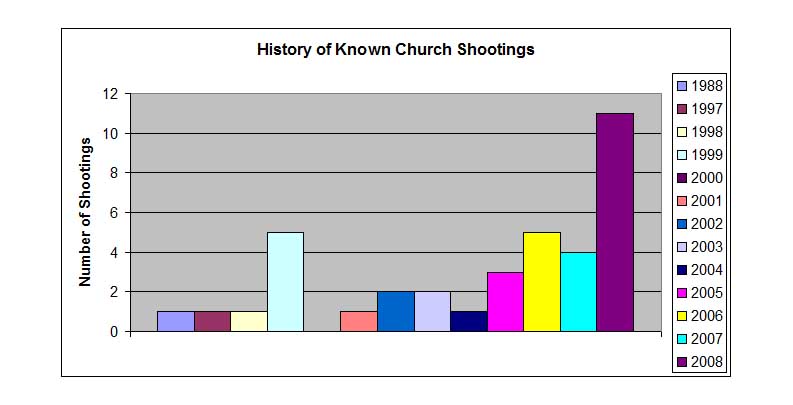 The fact is that the number of church shooting has increased from 4 to 11 between 2007 and 2008 that amounts to a 175% increase in the number of events. Now please do not panic, considering the number of churches operating in the country the number is still very small. The disturbing factor about this trend in the significant jump in the number of incidents over 2007. The number of people willing to commit an act of violence in a church is obviously on the rise. The ability to say, “It will never happen here” is now gone. As I review the incidents, it becomes apparent that no specific church size is the typical target. Incident occurred in mega church and down to small churches.

In reviewing the 11 incidents in 2008 there is a good trend that is starting to be seen. Church members are not permitting the violent offender to have free reign over the events. In some cases security teams have intervened as in the recent shooting at the Scientology church in Los Angeles where guards shot a man wielding swords before he could attack any attendees. In incidents in Los Angles, Tennessee and Delaware, church members swarmed the shooter and overpowered them.  This has dramatically reduces the loss of life per incident from 2.5 deaths per incident in 2007 to 0.9 deaths per incident in 2008. The reduction in loss of life per incident can be attributed to the willingness of church members  or in the church security ministry to get involved in the incident.

The following graph list the number of people killed in church shooting annually. 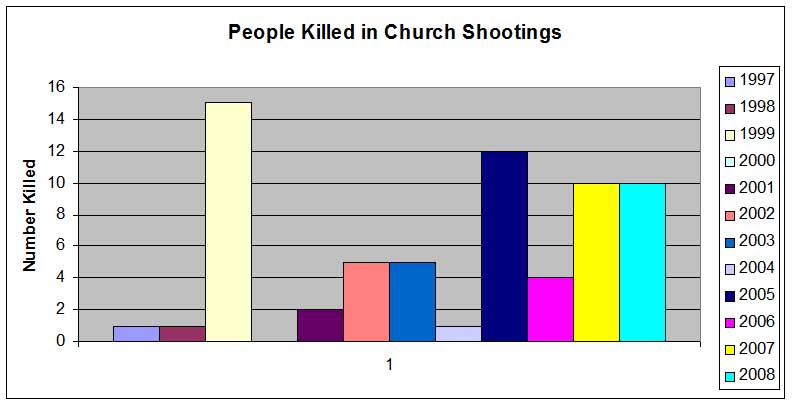 The bad news is that in 2008 we have a huge increase in violent incidents at church services and functions. The reasons range from marital disputes to angry former members to family disputes. Most of these had indicators that could be used to predict the potential for violence. See the article on Intelligence for Church Security Teams here.

The good news is that the loss of life per incident has been reduced due to the quick actions of church members, attendees and security teams. Please join me in prayer for a better year in 2009.